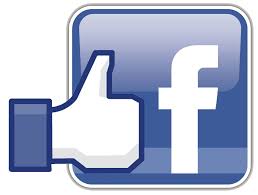 A common enquiry we get when people discover PDA Matters is about connecting with others who are dealing with similar challenges. We have our own Forums, but they are quiet. This is probably for a number of reasons, not the least of which is that there is a far more widely reaching tool with a lot of groups on it…. Facebook!

While it is our policy to not endorse any external entity (Facebook groups or otherwise) we felt it appropriate to acknowledge the existence of several PDA Groups on Facebook.

The following post is reproduced by the kind permission of Graeme Storey, admin for the Facebook groups listed in the article below. Please note that these groups are “closed” meaning that to access them you will be prompted to submit an application. This is to allow the sometimes sensitive topics discussed within them to be shared without fear of them being readily externalized. Even with that protection, good prudence would suggest that individuals use common sense when sharing online in any format, especially when under stressful conditions. The groups have their own, simple and sensible rules for sharing.

The article is below:

“Following on from some recent interaction in another thread, I am sorry you don’t know all the groups we run (although our accredited affiliate groups are all listed on the PDA Resource website smile emoticon:) )
So, for those interested, we also have other affiliated PDA Groups, which I co-founded and help admin at the moment – meaning I can let you in very easily if you want/need to apply. Please stay in this group, if you want, as well, and that way everyone can benefit from all the mutual support. 🙂 Here we go:-

The PDA-USA Group (incorporates Canada members, too) – The first group that grew from the Global Group
www.facebook.com/groups/pdausa/

The PDA Australia Group – The second group that grew from the Global Group
www.facebook.com/groups/pdaaustralia

The PDA New Zealand Group – The third group that grew from the Global Group
www.facebook.com/groups/pdanewzealand/

I am dealing with applications for all the above groups just now, which makes it easy for me to see if any of you are already in one – that saves everyone time. 🙂

Another resource that Graeme is associated with is:

This is a comprehensive site with lots of information. We link to this and other resources on our Links page.

The following post is reproduced with kind permission of Graeme Storey from within the Facebook PDA – USA Group and originated on thePDAresource.com at this link:

“DIAGNOSING PDA within the guidelines!!

I have posted this in a comment on an existing thread, but it is important enough to give it its own thread… The following is on The PDA Resource website, in PDF form, but here it is in text form for everyone.

Never mind the clinicians’ reluctance to diagnose PDA, they CAN do so, within the guidelines, and it is simply the way they write it down:-

PDA does not appear in the diagnostic manuals published by the World Health Organisation or the American Psychiatric Association. In fact, it only just gets a footnote in an appendix of the guidance produced by the UK National Institute for Health and Clinical Excellence.

It will be a while before it gets into any of those manuals because you need research studies involving thousands of diagnosed patients before the editorial boards will even start to notice it.

However, clinicians who are aware of the diagnostic criteria are free, in both the US and the UK, to diagnose PDA as a sub‐type of an existing diagnosable condition.

Indeed, the latest versions of the diagnostic manuals positively encourage clinicians diagnosing ASD to go on and describe the individual presentation in narrative detail.

It is also worth noting this paragraph from the NAS website about the use of the word “pathological”:-
“Demand avoidance can be seen in the development of many children, including others on the autism spectrum. It is the extent and extreme nature of this avoidance that causes such difficulties, which is why it has been described as ‘pathological’.”

For this reason, a diagnosis of “ASD with a profile of [pathological] demand avoidance” (with or without the word pathological) is a perfectly valid means of diagnosing PDA and remaining firmly within the letter and spirit of the American diagnostic manuals.

Thanks to Tom Crellin for the explanation above 🙂“

A new year brings with it a new project. Today we mailed our first tranche of letters to North American professionals we have heard are aware of PDA. Our goal is to develop a network of providers by skill (e.g. LCSW, PsyD, etc…), domain (counseling, community support services, therapy, etc…) and geography (state/province) and to provide access to this community to an archive of materials aimed at professionals, which is regularly updated from a global list of sources. In addition to providing this community with resources, we are asking if each of the professionals on this list is willing to be listed as being aware of PDA so that people who contact us for information can be provided their contact info as well. 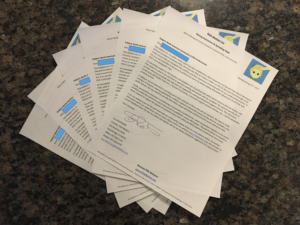 More to come as this project evolves.

By using http://smile.amazon.com to buy things online, 0.5% of your eligible purchases will be donated to PDA Matters if you register us as your preferred charity. The best part is that the range of products and the prices are exactly the same as on Amazon.com (in other words you can buy pretty much anything, for pretty much the best price and get it delivered ASAP!)

You can do this by following the link in the banner below:

We have recently provided links to some very interesting videos from the 2015 British Channel 4 series Born Naughty? which highlight children with Pathological Demand Avoidance syndrome (PDA) as compared to children who are “typical” and don’t require medical intervention. You can find those video links here:

For most, seeing the children in these videos triggers the “PDA light bulb moment” described by many who have discovered this condition within the lives of their family.

We should note that the videos are hosted on YouTube and we are simply providing convenient links to them from our site (we are not hosting the original materials).

It is with great pleasure that I can share with you that PDA Matters Inc is now formally recognized as a Public Charity and an Exempt Organization under the US Federal Internal Revenue Code (IRC) Section 501 (c) (3). Our EIN is 47-4766644.

This means a great deal to our team as we are now officially able to continue our mission without having to be subjected to US Federal Income taxes. Additionally, any donations made to our organization will be considered deductible under IRC Section 170.

Our supporters have already been generous, but we hope this milestone in our organization’s history will allow us to generate more donations with those who donate knowing we are officially a Public Charity and an Exempt Organization.

We have already been able to help dozens of families through our free book campaigns, but the demand has outstripped our resources, leaving hundreds of requests unanswered. Please can you consider donating to our organizations so that we can help fulfill the open requests for literature, and continue our mission to Raise Awareness & Spread Hope about PDA. www.PDAMatters.org/Donate

As always, your support is greatly appreciated. 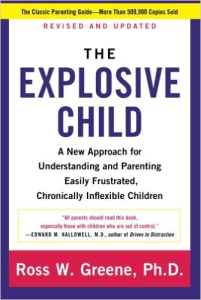 PDA Matters is offering free copies of Ross W. Greene’s book, “The EXPLOSIVE Child” to those affected by PDA and interested in some counterintuitive approaches to handling easily frustrated, chronically inflexible children. To obtain a copy, please E-Mail your name, shipping address and briefly how you are affected by PDA to Books@PDAMatters.org

We are able to offer these books at no cost to the requestors thanks to the generous donations we have received through www.PDAMatters.org/Donate

Having very little money means you need to be creative and in our organization that has a double meaning… As you know we have launched a Donation Box program for local stores, and it has been a success! People have not only been very generous, but they have also kindly commented on the creativity of our design. Today we have launched a www.FundMe.com campaign to try to raise enough money to buy the materials for another 10 boxes.

Each box costs about $25 in materials and we then put in a couple of hours of labor per box to assemble them. So we are looking to raise $250 in the next week via this link https://www.fundme.com/en/projects/23726-Charity-Donation-Boxes
You can give as little as $1. Please consider this worthy project and spread it far and wide within your network! 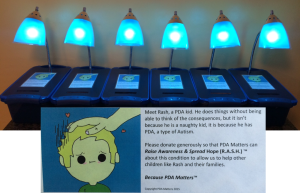 While it may not seem like much, our donation boxes took a lot of work to produce. In fact we are up to what our engineering friends would call V1.3 🙂 That is we have the same basic configuration (box shape & blue light on top) but we have evolved the details 4 times (1.0 to 1.3) to our latest “production standard”: 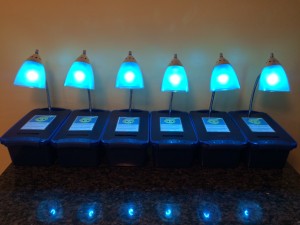 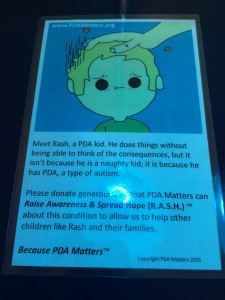 What does all this mean, well we have achieved our goal of a high quality, eye catching donation experience which will hopefully continue to inspire individuals to give the change they have in their pockets towards our cause. So far our V1.0 – V1.2 boxes have been receiving donations, we are hopeful that this next generation donation box will exceed what we have already been able to accomplish!

Of course, for those not within range of a PDA Matters donation box, there is still the option to donate online (www.PDAMatters.org/Donate/)

Another small step on our long journey!

I wanted to bring to your attention a great new paper that has been published in the European Child & Adolescent Journal titled, “Identifying features of ‘pathological demand avoidance’ using the Diagnostic Interview for Social and Communication Disorders (DISCO)“.

You can find the paper linked through our /resources/links/ page here.

From my non-professional perspective, what is exciting about the approach outlined in this paper is the connection between an existing clinical assessment tool (DISCO) and PDA. This should improve the ability for clinicians to separate PDA cases from other psychiatric conditions due to the pervasive use of DISCO.